When Northern California chefs can’t hunt for local fungi themselves, they turn to this female forager

Todd Knoll, executive chef at Jordan Winery, is an avid mushroom hunter, but his busy schedule in the kitchen can sometimes keep him from getting out into the woods to forage. That’s when he calls Connie Green at Wine Forest Wild Foods. Known as The Mushroom Lady since 1981, Green combs her favorite locations in Sonoma, Napa and as far as Mexico for edible treasures.

“Connie was a pioneer, delivering foraged mushrooms to chefs and convincing them that our mushrooms are much the same as their European counterparts,” Knoll says, “and now she has a network of foragers bringing the wild to celebrated restaurants like The French Laundry and The Restaurant at Meadowood in the Napa Valley and Boulevard in San Francisco. Connie also has written a wonderful cookbook called The Wild Table, and many of her products are available for purchase, including her award-winning shrubs, dried wild mushrooms, truffles and other ingredients I cannot cook without.”

Green grew up foraging for wild blackberries, grapes and sassafras on her grandparents’ farm in the Florida Panhandle. Her late husband came from a long line of mushroom foragers, and through him, Green’s knowledge of the tradition expanded. The couple moved to the Napa Valley in the late 1970s and brought along their passion for foraging. Gradually, it turned into a business.

Like any expert mushroom hunter, Green won’t reveal her foraging locations, other than to say that her hunting ground includes the hills of Napa, along with the Sonoma and Mendocino coasts. When searching for fungi, she looks for certain types of trees that are associated with culinary mushrooms.

“Different mushrooms have one particular type of tree that they like and they exist in a sort of marriage,” she says. “Here in Northern California, up towards Willits and all along the coast, we have a lot of tan oak trees. Black trumpets and matsutakes love them.”

Learning to identify mushrooms in the wild is a matter of repetition and familiarity. “You learn one mushroom really, really well, and then you learn another,” Green says. “We have the weird blessing that a lot of the greatest, most delicious edibles are some of the easiest to identify. Chanterelles, black trumpets, yellow feet, hedgehogs, morels—nothing looks quite like them.” 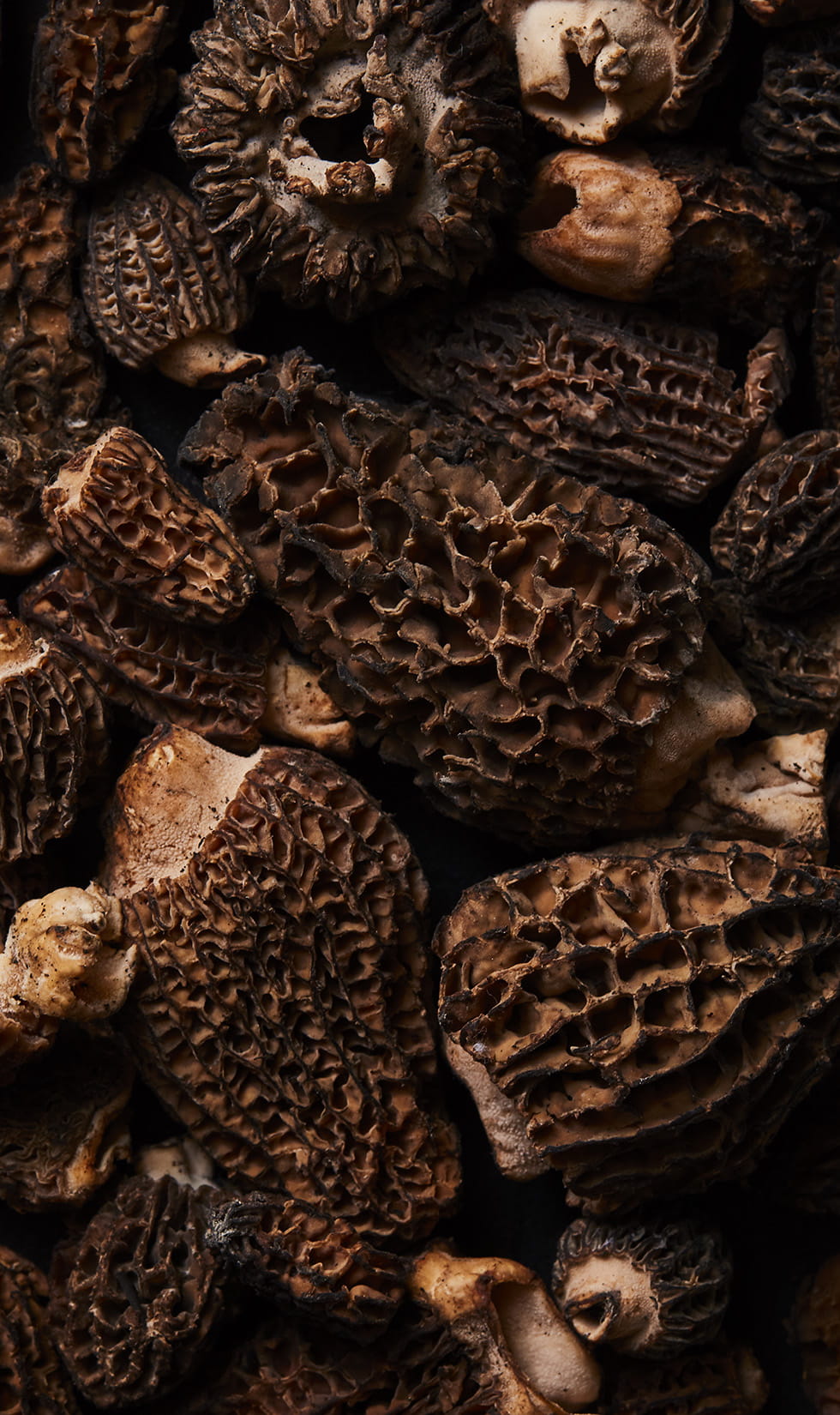 “You learn one mushroom really, really well, and then you learn another,” Green says. 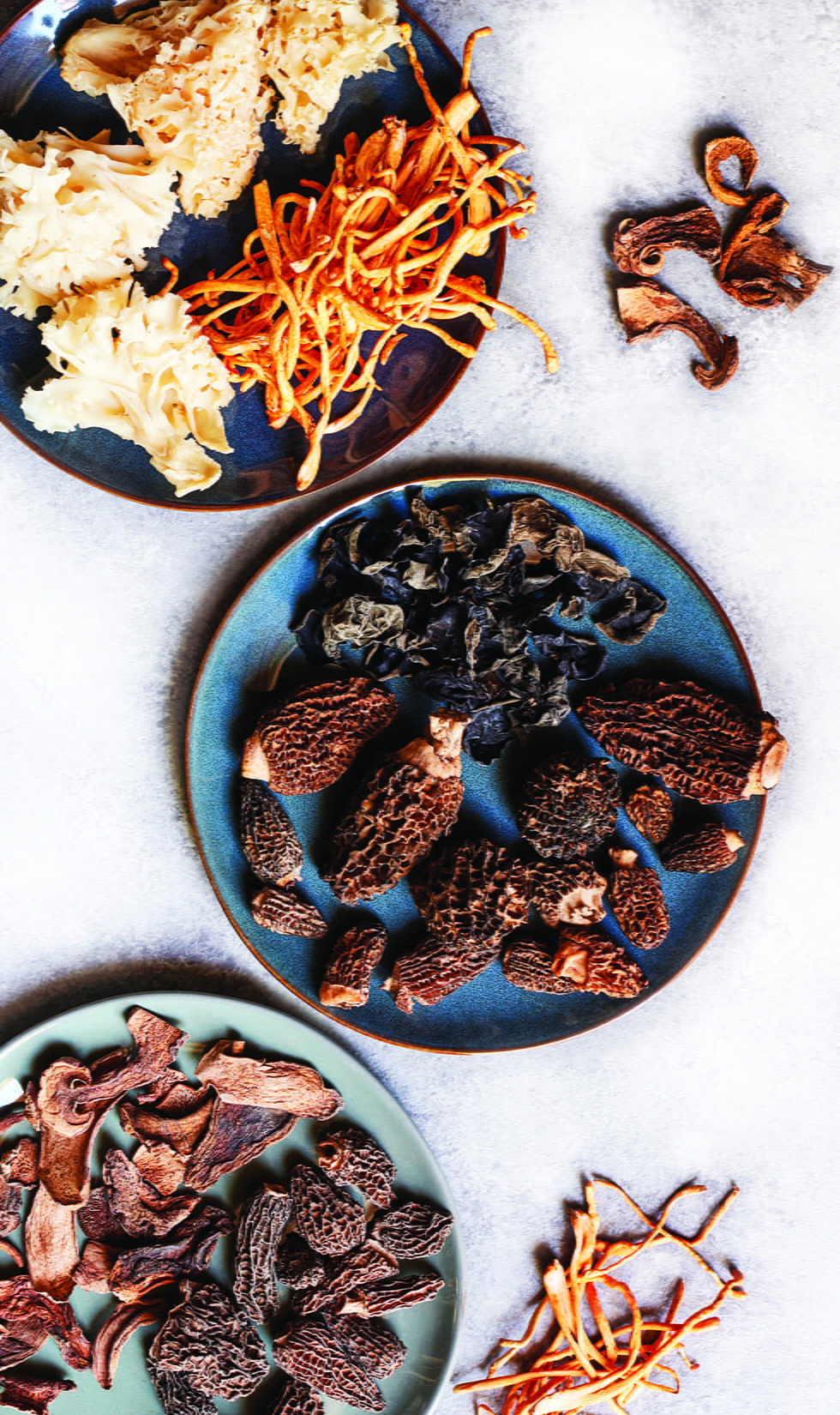 Another distinctive mushroom is a large, lacy white variety called the cauliflower mushroom. “They’re not common, but they can be very large and they’ll grow back in the same place for many years,” Green says. As delicate as they look, she adds, they have a satisfying, cabbage-like crunch.

Knoll uses cauliflower mushrooms in soups, sometimes as a replacement for noodles. “First I sauté them a little in a pan, caramelized until the edges are golden brown and just cooked through, then add a splash of sake to deglaze them,” he says. “They’re a very mild mushroom—more about texture than flavor—so they take on the taste of whatever you’re cooking them in.”

Green also introduced Knoll to bright orange cordyceps mushrooms. Knoll compares their flavor to that of a chanterelle, with a little bit of a fruity character. When cooking cordyceps, he quickly sautés them so they will maintain their texture, color and bite. “It’s almost like cooking gnocchi,” he says. “You want them just to the perfect point of doneness, as with properly cooked pasta or haricots verts, for example.”

Knoll recently included both cordyceps and cauliflower mushrooms in a luscious mushroom bisque, alongside morels and porcini. He prepared each type of mushroom separately, then composed an array in the bottom of each bowl before surrounding the fungi with the velvety mushroom soup. Finally, the soup was topped with rosemary leaves, shaved black truffles and truffle salt.

“I sautéed the cordyceps in olive oil and a touch of aged sherry vinegar and fresh lemon for brightening and balance,” he says. “I try to make each bite a varying combination of acids, flavors and textures. This showcases the versatility of our wines, elevating the pairing experience.”

Because Green often can’t predict more than a week in advance which mushrooms will be available at any given time, Knoll must be creative and spontaneous in the kitchen.

“One of the things I love about Connie is that she won’t sell you anything until it’s ready, and while there’s no guarantee with wild foods, she always has an informed alternative for me,” Knoll says. “Connie never disappoints.” 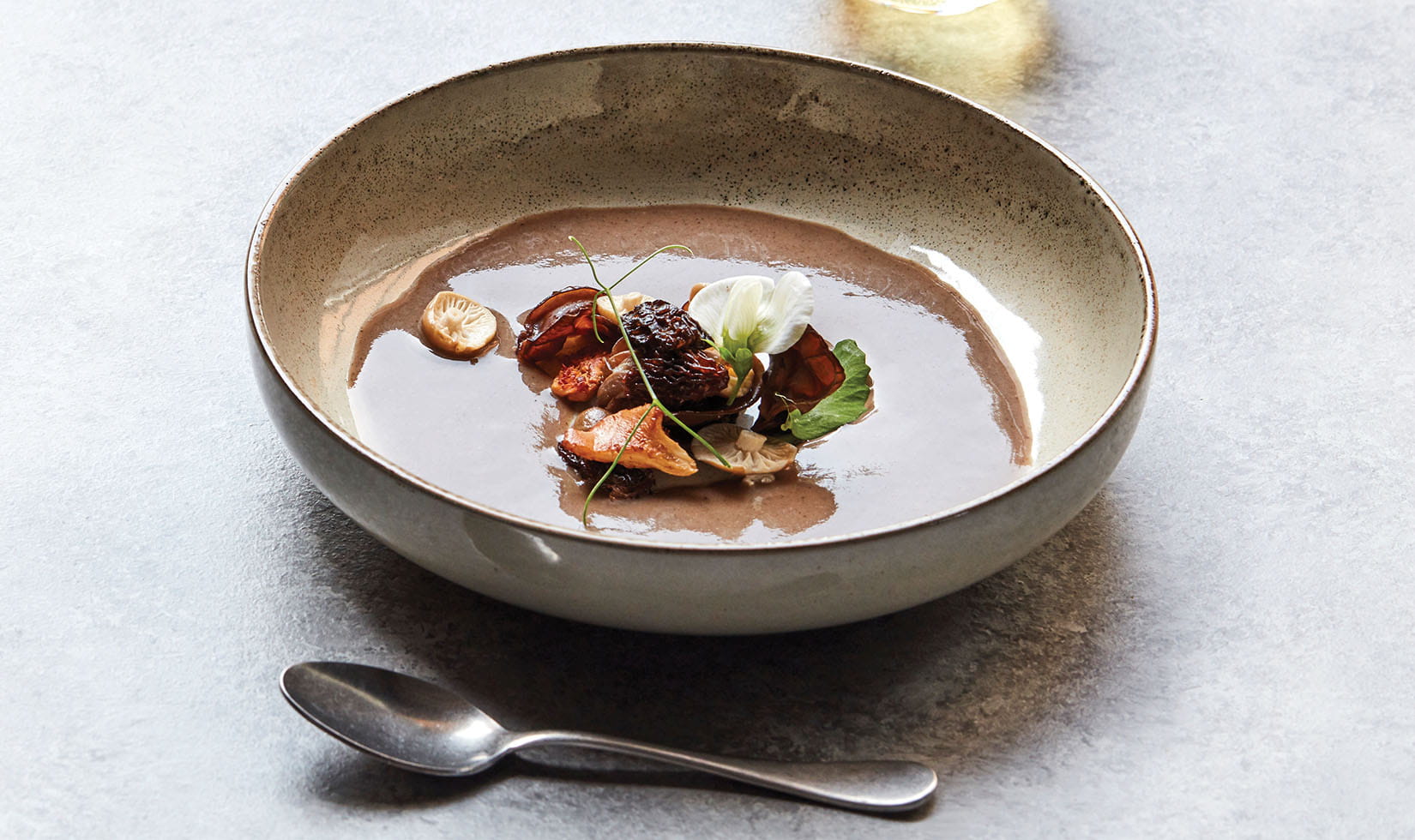 This luscious mushroom bisque features a variety of mushrooms, including cordyceps, cauliflower, morels and porcinis.