Discover creative ways to use fermented tea in your kitchen

Kombucha may be having a moment, but the fermented drink is far from new. It is said to have originated more than 2,000 years ago in China, where it was known as The Tea of Immortality. It was also used in Russia, Eastern Europe and Japan for centuries before making its way to the United States.

The drink is made by adding a symbiotic culture of bacteria and yeast (SCOBY) to sweetened tea. Just as yeast consume the sugar in wine to produce alcohol during the fermentation process, the SCOBY eats the sugar and tannins in the tea to create byproducts such as B vitamins and antioxidants, which can aid digestion and boost the immune system. 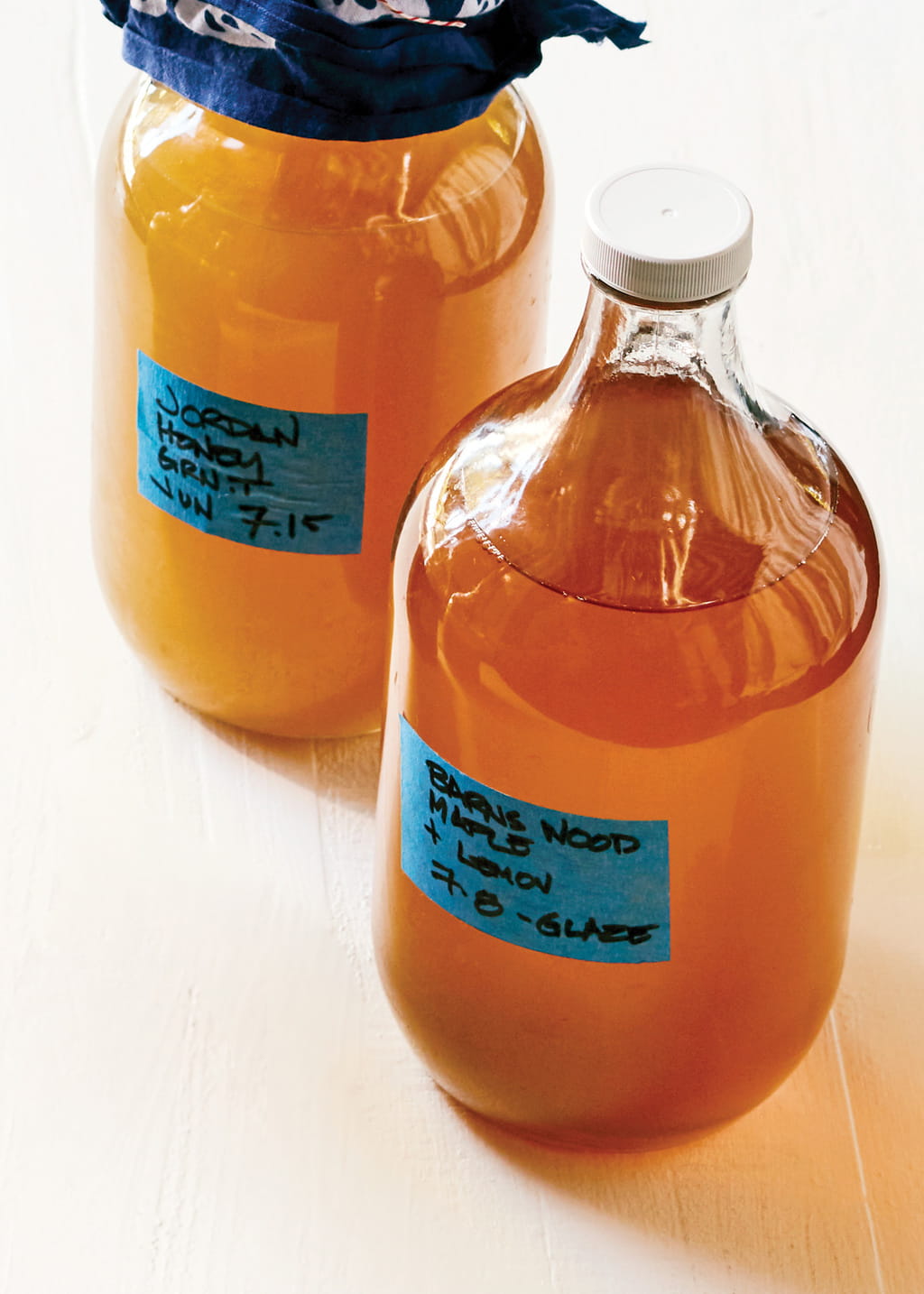 The SCOBY is removed after initial fermentation is complete, and flavorings such as fresh fruit, herbs or juices may be added for a secondary fermentation in the bottle. The resulting drink is slightly effervescent, with a tart, tangy favor.

Kombucha is most often consumed as a beverage, but it can also be used as an ingredient in cooking. Todd Knoll, executive chef at Jordan Winery, was inspired to start brewing his own kombucha to use in recipes after reading The Noma Guide to Fermentation by René Redzepi, chef at the legendary Noma restaurant in Copenhagen, and Ferment by renowned Australian chef Holly Davis.

Along with standard kombucha, Knoll makes a variation called “jun tea,” brewed with a special SCOBY which, through careful selection over time, feeds on honey rather than sugar for a brighter and more delicate flavor.

“SCOBYs are now available online from many sources. The most dependable for us has been Fermentaholics Organic SCOBY with Tea (available online). The SCOBY always arrives healthy and well-packaged,” Knoll says. “A well-cared-for SCOBY will continue to produce indefinitely. Simply add some of the kombucha from the previous batch, along with sugar or honey as a food source.”

Rather than just drinking his kombuchas, Knoll reduces them in a pan on the stovetop to create highly concentrated syrups and glazes. “I found these syrups to be the most interesting addition to our work in the kitchen in a long time,” he says. “Kombucha has a rounder acidity, making it much more wine-friendly than vinegar, but we use it like a vinegar in cooking.”

Glazing carrots in coffee kombucha syrup was the first technique he worked on and branched out from there. Knoll then developed a rose kombucha syrup to finish a light quail broth, and blended a lobster and halibut fumet with passion fruit and mango jun tea to create a fragrant pour-over for a lobster dish. He also reduces kombucha glazes for brushing over duck and pork.

“It has a complex and unique favor profile,” Knoll says. “No one has put their finger on it yet.”

5 Fun Ways to Use Kombucha in Recipes

Kombucha’s tang makes it a great substitute for vinegar in salad dressings. Simply add a tablespoon to your recipe with Jordan Extra Virgin Olive Oil—skip the salt because it’ll cure.

Thanks to its acidity, kombucha can also be used as a marinade for many types of meat, including duck, pork, beef and chicken. After marinating, season meat to your liking and cook.

To create concentrated syrups and glazes, reduce kombucha in a pan on the stovetop until it thickens. Add butter to the kombucha in a pan and then sauté fruits or vegetables directly in the glaze. Or, simply drizzle syrup over meats or fish before serving.

Try kombucha as an acid substitute in drink recipes. Kombuchas that have undergone a second fermentation with fruit or juice can add a deliciously fruity and fizzy element. Use it in cocktails as you would bitters.

Kombucha can be used to soak grains for baking or cooking, to help decrease the grains’ complex elements for better digestion.